“ Samaritan House, Sannie and my girlfriend saved my life. ” 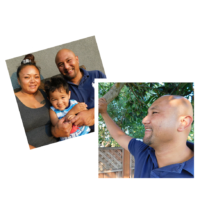 Michael has made a fresh start and is turning a new chapter in his life. Now a hopeful father in his 30s, Michael got involved with drugs at an early age and lived on the streets before reaching out to local agencies for help. He and his girlfriend Janet, with whom he shares two children, both struggled with addiction. But, they also wanted a better life.

We met Michael through the CES program, as he was preparing to graduate from a residential sober living program. Janet and their two children were living at a family shelter at the time, and Michael was not eligible to move in with them. He wasn’t able to secure housing after graduation and risked relapse if he became homeless again.

That’s when our CES Specialist, Sannie, stepped in to help Michael, his girlfriend, and their two children to coordinate an immediate solution. “Through our established partnership with Serendipity Sober Living, I was able to place Michael in a safe environment the following day. He was no longer at imminent risk of being homeless,” recalls Sannie. Serendipity Sober Living is a residential program with outdoor common areas and is a stable place to reside for as long as Michael needed. CES Specialist Sannie also helped the family with paperwork to qualify his family for rental assistance.

Due to his lack of employment at the time, CES assisted Michael with his first month’s rent. Michael’s stay at SSL was brief but fruitful. With the stability and dignity afforded him by his new living situation, Michael was able to focus on finding a job, which he soon landed. And, with the help of Sannie, the family was able to complete the steps qualifying them for housing assistance. They have since relocated into permanent housing, in nearby Fremont.

I know that if I wasn't connected with a sober place to live, I would have relapsed. All I needed was somewhere to continue my sobriety while I looked for work.

Following Michael’s triumphant transition from dependence and homelessness to sobriety and self-sufficiency, Sannie pursued a long-term partnership between CES and Serendipity Sober Living, a worthy agency to which we have now referred four of our clients – all of them success stories.

Samaritan House was selected through an RFP (Request for Proposal) process by the County to administer the Coordinated Entry System program, – a new county-wide program which includes all seven Core Service Agencies. This program was designed to streamline and prioritize access of limited resources for the most vulnerable San Mateo County residents seeking homeless services.

The main objective of this program is to get a full understanding of each person or family’s situation, explore all options to help them avoid homelessness, and, when needed, place them in shelters appropriate to their situation. Using all available resources, we help them solve their housing crisis. The program started June 19, 2017 with families and was expanded to include single adults in January 2018.

Your gift helps us continue helping people like Michael.

Help us by donating today!