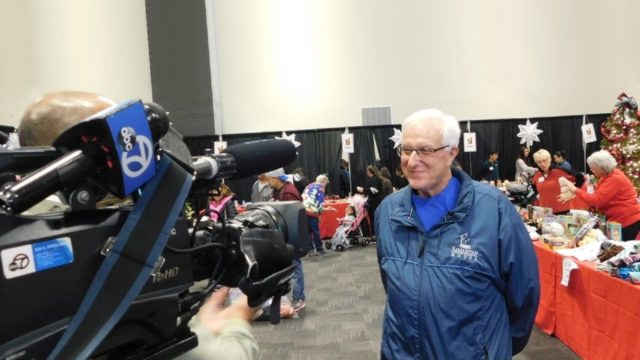 I was in my office, trying to seize on a small window of opportunity to tackle a pile of paperwork, when a client came running through my door. “Julia! You have to see this. Willie built an easel!” I knew, or rather, I had heard, that my client Willie was an artist. A likeness of Janet Jackson, almost eerie in its uncanny resemblance to the pop star, had floated for many years from office to office at Safe Harbor, left long ago by Willie after a previous shelter stay. But I had never seen his current work, nor had I seen him in action. I went outside where, indeed, Willie had, using two chairs, some posterboard, and other odds and ends, fashioned himself a makeshift easel and was hard at work, charcoal pen in cramped, blackened hand. I joined the gathered group of spectators who stood in silence, eagerly watching as Willie put pen to paper and the shape of a face began to form.

We soon decided to move Willie’s art supplies upstairs into our second floor Learning Center; a new room at the shelter, designated for onsite programming. In this room, we offer a host of courses for our residents, such as financial literacy classes and resume workshops. These classes are meant to help our residents make the most productive use of their time at the shelter; to further assist them in their goals of self-sufficiency, employment, and permanent housing. But this room also serves a second, and equally important purpose; to build life skills, to expand creative abilities, strengthen social emotional and physical well-being. To that end, we’ve offered yoga, nutrition, color therapy, arts and crafts, knitting, and, of late, Willie’s fine arts studio. 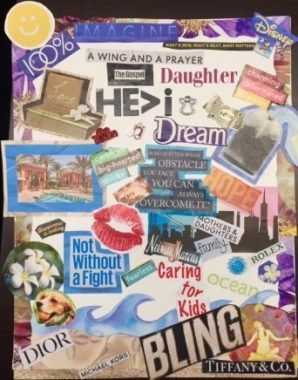 In March, one of our staff members started a weekly women’s group in that same Learning Center. The group is not therapy; it’s a safe space to explore and navigate the challenges of living in a shelter as a woman, as well as a place for women to express their creative sides. Recently, they put together vision boards; empowering artistic collages to express ones’ dreams, goals, and hopes for the future. They made these using simple materials that we’ve had donated; old magazines, colored markers, stickers. The results were extraordinary. Sometimes I leave work feeling powerless, nearly hopeless at the homeless situation in our County. How is it, I thought to myself, as I looked at each finely crafted board, that our residents, despite the hardships, the heartache, the struggles, were able to draw on such inner strength and creativity to produce such things of beauty? And why is it that I ever doubted they could? 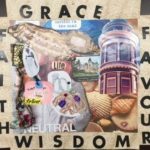 Earlier this year, a former client emailed me to ask for a recommendation letter as she was putting together an application for an MFA program in creative writing. I had not seen this client since she left the shelter more than two years ago, but she felt that it was during her time at Safe Harbor that she experienced the personal and artistic growth to propel her to reach for this long-held dream of hers to go back to graduate school. I was deeply moved that she had found her experience at the shelter to be so transformative, and, more importantly, that she was taking these brave steps (at the age of 50 no less) to fulfill this goal of pursuing a career and a life in the creative arts.

So often I am surprised by the imagination and the thirst for knowledge that I witness on a regular basis at work. We’ve had guitarists, sculptor, painters, writers; so many creative and capable individuals. It is so easy to stigmatize that which we don’t know or which we fear. The concept of homelessness, of a homeless shelter, does not necessarily immediately lend itself to the notion of the creative arts. So we make assumptions and snap judgements, as we are naturally all prone to do.

But on that day, watching Willie begin to sketch out a future masterpiece in the front parking lot of our 90 bed facility, surrounded by his fellow residents, I had to simply take a moment to reflect and to remind myself that there is so much beauty in the world, if only we open our eyes to it.